started a topic about 3 years ago
I want to use my sonoff 4ch pro with a physical wired switch, but when I switch the light on using the sonoff if shows on state of the relay, when I switch the light off by the physical switch the relay remains energized (on state) so in order to turn my light on again using sonoff I need to ask Alexa to turn my light off. Any way there can be a setting where regardless of whether I say on or off it just changes state of the relay?this feels a bit more natural... Even if I need to do hardware changes or change the firmware myself for a unique solution
4 people like this idea
32 CommentsSorted by Oldest First
E

said about 3 years ago
If IFTTT integration were working I would be able to tell you if there is a ‘toggle’ option for EWeLink. I have a wemo Insight Switch and it has toggle. You could then link Alexa a custom phrase that gets IFTTT to toggle it. Can’t remember if it has toggle option. Even if there is no toggle option you could do it anyway by linking the free ‘Apilio’ to IFTTT, storing the device state and just performing the opposite. That would be quite easy if they get IFTTT going again. If IFTTT connecting was working the latency isn’t huge from Google-home->IFTTT->Apilio->Sonoff 4Ch. I use to turn on fans when cycling and it happens within a couple of seconds (from U.K.)
T

said about 3 years ago
Best option I think would be to expose the switch contacts so that remote push buttons can be wired in.  The trouble with two-way switching using two Sonoff switches is that the system won't know whether the light is on or off without some more obscure logic.
C

problem is then you still rely on the module to switch lights on/off, when the device fails I don't have manual intervention. don't really mind not knowing the on/off state, just that if I say on or off change the state of the relay.

said about 3 years ago
I don’t really understand the circuit here: is the Sonoff connected in parallel to the normal switch? There is a setting in the App for condition on restoration of power. I have them ‘on’, so I can connect the switch in series. Then even if I can’t control the Sonoff I can just cut power to it and restore power to it; on.
C

Hence I'd like to use a phrase like : Alexa toggle kichen lights to change the state of the relay (since I might have switched the light on or off with the wall switch) or just say Alexa kitchen lights on (then the relay will change state to give the desired output - relay on/off might not correspond with actual ligtht on/off)

This has been extensively discussed in other threads here.  I suggested they make a 3way switch that includes a current sensor.  The presence of current load would indicate the light was burning.

said about 3 years ago
Agree but that is a hardware change and will add to cost, my request is a software one, even if software based the buttons don't need to show on/off state, clicking will merely change the state in the same way as the buttons on the device does
E

said about 3 years ago
@chaun Thanks for the picture. TBH I can’t even imagine how it would work with a three way switch. I have some two-way semi-smart touch light sockets that only need a single wire for communication, but you need two of the same make. I can see how you would do this with two Sonoff switches.
E 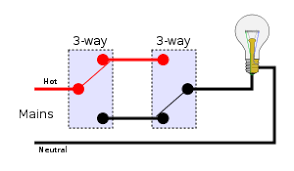 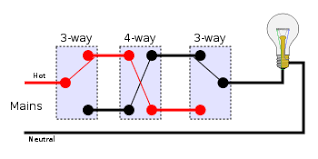 What I would like to see produced is a 3-way wifi touch switch.  All that is needed is to use a relay with Common, NC, and NO contacts.  Incorporate a current sensor that will let the app know if the light is burning.  With this one simple device a user could replace one of the 3-way switches in either of the diagrams above and operate the light via wi-fi.  At the same time the other manual switches could also continue to work normally.

said about 3 years ago
You don’t need three way switches, current sensors or any hardware changes if both switches are Sonoff and can talk to each other. We just need some details of how their LAN control scheme is going to work. They could have it designed so if the LAN fails a master switch defaults to access point mode and the system still works.
E

I agree EB but a nice 3-way switch would still be an excellent and easy product for ITEAD to manufacture.  It would allow only replacing one switch instead of all of them and work seamlessly with manual switches.

The part about "can talk to each other" doesn't have a good track record.  :-)  Right now ITFFF and ewelink aren't talking which is a pain.  That sort of thing doesn't inspire confidence!

said about 3 years ago
Lots of activity throughout the night on the forum :) The 4ch pro is basically already a 3 way switch since it's got a No/Nc combination, but the software doesn't give me the option to toggle the relay, as stated a quick software change will make this possible. Regardless whether I say on or off just change the state of the relay, worst case if the light is already on and I tell Alexa to turn it on it will switch off but with my homemade arduino light controller I haven't come across anyone saying switch on if it is already on, sort of human nature to say the right thing. Even if the remove the on off state from the app to just replicate the buttons on the device itself, a simple push changes the state of the relay. Does anyone know where I can get the software to change it myself? My Arduino one works okayish but it's got bugs, the sonoff one so far is much more superior than my DIY option. As is now it just feels unnatural to switch a light off and guess with Alexa to turn off.... Nothing happens then having to say turn on in order to toggle the relay
T

said about 3 years ago
I guess terminology may depend on region.  In the UK we call this two-way switching, and the two switches at each end are two-way switches.  The middle switch on the drawing, that swaps the two strap links over, is an "intermediate switch".  I've seen the term three way used where there's an intermediate, but that's really a misnomer because you could have any number of intermediates.

said about 3 years ago
I see ifttt doesn't give the option to toggle, need to select on or off, doesn't seem like I can put if phrase and on then off... Dammit
Login or Signup to post a comment
More topics in Feature Request
See all 859 topics